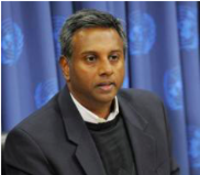 1.   Can you tell us about the path you took after an MBA degree from IIM A?

A somewhat meandering one might be one way of describing it. Starting with Wipro, then to an international development NGO, ActionAid, to going back to school, to the UN and now with Amnesty International.

2.   What drew you to the social policy and planning course at London School of Economics?

After working for a few years in the field of international development, it became very clear to me that I needed a stronger theoretical grounding in the subject. Both my first degree in accounting and my MBA have stood me in good stead but I had to get some training in the vocation I had chosen.

3.  What inspires you to work in the social sector?

When a small proportion of the population have captured most of the wealth and power, particularly in developing countries like India, and a handful of rich countries have done the same at the international level, it stops being a social issue and much more a political one. I come from a household where the idea of justice has been an early and abiding driver.

4.  Can you tell us something about the Millennium Campaign. How can the members of IIM USA contribute towards these goals.

The UN Millennium Campaign's raison d'etre is to hold governments, of rich and poor countries alike, accountable for the commitments they made at the UN Millennium Summit in 2000 to significantly reduce poverty, illiteracy and disease by 2015. The accountability of governments must be, first and foremost, to their citizens, their voters. So the campaign is focussed on inspiring citizens to get their governments to deliver on their promises. The best way to take action is to get on to www.endpoverty2015.org or www.one.org . From 17-19 September this year, there will be a great global mobilisation which you can join www.standagainstpoverty.org

5.    You have worked across countries and causes. Which cause is closest to your heart? Can you share some interesting insights about your experiences.

I have been very fortunate to have worked almost all the time on issues that are close to my heart. My greatest learning and inspiration continues to come from the time I spend with individuals and communities, particularly in Asia and Africa, who have yet to see even the most basic freedoms that you and I take for granted including freedom from hunger, disease and violence. And some basic rights like the right to education and the right to be heard. It is their wisdom, their resilience and their resistance that is simply awesome.

6.  You are seen as a civil society leader. What advice do you have for others wanting to follow your path?

Injustice is normally the consequence of the abuse of power. Speaking the truth is hard enough but speaking truth to power is so much more difficult. Whether in one's own home, at school, in the workplace or in the public sphere.  The sort of work I do is not really a career, so career advice would not be very helpful.  Nothing I have done so far has happened through any planning. And  I  am  reluctant  to  say  anything  that  sounds  like  one  is moralising!