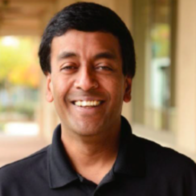 1. Tell us your career journey - from IIMA to the Corporate and your discovery of love for Academia.

Soon after I finished at IIM Ahmedabad, I joined Citibank working in India for 2 to 3 years. Citibank then posted me in Hong Kong to a group building trading technologies and working with dealing rooms all over Asia, Europe and the Middle East. I was one of the few people in the group that had an MBA, but not a PhD in Math or Physics. All my work till then was application oriented. But I soon realized that I wanted to build the models that teams like mine were using. I couldn't do that without higher education beyond Grad school. So I did a PhD at NYU. I thought I'd go back into the industry and do all the ‘building’ under the hood, but then Academia became a lot more interesting. It was more the desire to build a car than to drive it that became my reason to leave the Corporate world and stay in Academia. This desire got me learning the Mathematics that goes into modern finance and embedding models into software. When I finished my PhD, I started my first academic job at Harvard. I was teaching finance in the Business school and doing my research. Along the way, I realized I needed to know Computer Science. The finance PhD wasn't enough for me to work in Computational Finance. On sabbatical from Harvard, I went to Berkeley to do a Masters in CS. Now, that was an absolutely crazy experience because I had no background in CS. I joined school and for the first few months, I had no idea what was going on. But then you slowly pick it up and get moving. My wife was teaching at Berkeley at the time, which made this easier; I came to Berkeley as a visiting professor, teaching and doing my MS there together. My interest in the Computer Science piqued as well and I decided that staying in the Bay area will help my family and allow me to indulge my other research interests. Around then, Santa Clara offered me a position and I’ve been here since.

2. With your experience in the field of market failures and risks, what do you think is the next big problem area? Do you think that the large dependency on the Tech sector now could cause a market crash?

Right now, I think one of the biggest dangers is Student loans. That’s one area where we're seeing major risk and defaults occurring. The other big area is labour markets. I think the next political and financial crisis will be people not finding work in many domains. Technology is doing a fair amount of damage. And the impact now is very large.
At this point, at any given time, there are about 4 million truck drivers. There are totally about 15 million trucks in the US. So, if we get self-driving cars, we're putting that many people out of work. That’s just an example. With technology, companies will try to move jobs. Government intervention will have only so much of an impact.
So, re-positioning the labour market is a massive exercise that has to be handled methodically. The only way to really succeed in that is to improve the education levels in the country. And I don't see that happening in the short-term, especially not with the current Education regime. That's the biggest problem right now. We need to a workforce that's far more skilled than our current generation’s capability. This generation is already too late. But the kids that are in school now, that's the generation that has to be trained better. But that's not going to be easy.

3. Is this not the case with most developed economies? The focus, initially on unskilled labour as long as there are infrastructure building jobs, shifts towards highly skilled jobs, until another high dependency industry is disrupted. In that sense, as a country, if you don't keep moving with time, isn't there bound to be a crash sooner or later?

That's right. All crises start in some market. The Dot-com crisis in particular was not a systemic crisis. It was much more localized than the Mortgage crisis. The mortgage crisis spilled over into lots of other sectors. Because once the crisis hit the banks and they became relatively weak, they couldn’t lend and the whole money multiplier shut down.
But the labour crisis that's coming will be different. In an economic crisis, people get put out of work. And that happens because there's a cycle. When one sector gets hurt and they can't invest, it leaks into other sectors and things go down and that indirectly leads to lower employment. But here, there's a direct mechanism to kill off employment right away.
Once people are unemployed, they won't be spending; and once they don't spend, it'll create a slowdown. Usually, a slowdown happens and then people lose their jobs. Here, there'll be a reverse effect in a slightly different direction.

4. With industries changing at such a fast pace, how should we, as skilled workers stay ahead of the curve and build the right skills?

It's not always easy to predict what's coming. Even if you could predict, it wouldn’t be easy to transform everybody towards a goal. You just may not have the temperament or the skills that are needed. But I do believe that teaching people how to think will help. The problem should be solved one step back, at the time of education itself. People should be taught how to think about problems.
One way to teach people to think is to focus on a very technical education, such as an engineering program. People generally graduate out of engineering programs with a thought process that helps identify different analytical ways of working with a problem.
Other disciplines that are not too technical have also become much more so along the way and must be taught in the same rigorous fashion. For example, psychology which never used to be a big thing for business is now a huge deal. Every time you design a website or change an offering, a good background in psychology helps you understand which variables to push and what experiments to run with the data. This enables you to generate inferences that change the way your approach to a problem. So I think education should be much more rigorous than it used to be.

5. Do you see India become the next technological hub as the US with respect to entrepreneurship? What do you think are the show stoppers for Indians?

I think India is already there in many ways. In the last ten years, the number of people who are setting up companies has exploded and you can see that already with the growing private equity market in India. I can also see it on campuses with the students. This time at ISB, the bulk of finance students wanted to create something new in the FinTech space.
They didn't want to go work for companies as much anymore, but instead wanted to build new things. The success of companies, such as PayTm, which became very hot because of demonetization, is a neat example of how quickly a FinTech play can grow in such environments. I think a lot of financial forensic work will take off, especially with the Government’s initiative to crack down in many areas.
Though India is getting there, it also needs work. India is good at getting onto a technology driven business paradigm, whether it be trading exchanges or payment systems and it is easier being productive in India thanks to scale efficiencies. But Indian institutes are not doing any fundamental research anymore.
China is going to eat India's lunch in that game. China is investing hugely in getting researchers back to China. We don't have that culture in India.
The only interaction I had on that aspect was with the RBI. When Raghuram Rajan was RBI Governor, he tried to push some of the research culture in. The head of Research at the RBI, N R Prabhala, was also another IIMA alumnus, who was my classmate when I did my PhD at NYU. With him, we were able to do some work. We built the technology to map the entire banking system, an exercise we’re doing in the US.
The idea was implemented in India first. That was the first attempt at getting research institutions up and going. We do have some institutes, like the IGIDR in Bombay that do good work. But the work needs to get translated into practice.
There is no shortage of talent in the IITs and other such technical schools. But the real problem is that the faculty does not have the right incentives to keep their research going. So research won't happen at the universities very easily, but we do have the opportunity to create a whole bunch of think-tanks like Bell Labs and Silicon Valley in the old days.
Companies have to set that up. And the companies that do that will be better positioned for innovation. For example, McKinsey was thinking about creating a Data Science team in India. Such initiatives need to be started. They need to hire fairly technical people to start collaborating with a bunch of companies and help them use Data science effectively. The whole point is lost when companies don’t ask themselves these important questions. Much lesser that 30% of recorded data gets used effectively by companies. Banks in Asia have still not figured it out.
Finance companies are generally slow moving, but at the start up levels companies are getting much better at using personal data, texting information and other such things. Even to the section where nobody would lend to, there are clearly people with good and others with bad credit. Capital One has done it in the US very successfully. They use a lot of personal data to go below all the cut offs that the personal credit card companies don't want to touch.
In India, personal data is more freely available than in the US, where there are more restrictions. Profiling activity in India with so many people will be extremely productive. Whoever starts doing that well will be able to support many companies. However, Research driven enterprise in India is not there yet.
There's always a bureaucratic person running the shop somewhere, who doesn’t see the value in change. We do have an old historical feeling that we care about learning. We should also want people to do fundamental research and build-up indigenous stuff. But we keep borrowing ideas. China did that for many years - they'd just steal technology and ideas and implement it beautifully. In the last 5 years, China has completely changed. They're building incredible universities with huge amount of funding to kick start their own research. Tons of Chinese people are going back from the US. Andrew Ng at Stanford, who created the Machine Learning course, was working at Google for a while. Now Baidu has hired him as their Chief Scientist, building AI in labs in China. At AI, China will probably be better than everyone else very soon. But India doesn't even have a word anywhere for AI. That's where we’re falling behind and we can't afford to.
When we begin to build on new ideas ourselves, rather than others’ technology, we’ll be in the race.(The views expressed herein are those of Prof. Sanjiv Das and do not necessarily reflect the views of IIM Americas or its Board of Directors. IIM Americas, as a matter of policy, disclaims responsibility for any publication or statement herein.)Tell